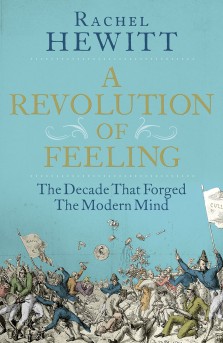 A Revolution of Feeling: The Decade that Forged the Modern Mind was published by Granta in hardback in 2017, and paperback in November 2018. A Revolution of Feeling is about emotion: it explores how the emotions that we allow ourselves to feel are shaped by our societies, culture, politics, and language. In particular, the book is interested in emotional change – radical shifts in how people think and talk about emotion – and it charts how this is often a consequence of radical political change. 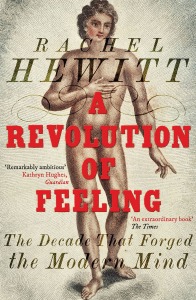 A Revolution of Feeling explores these ideas in the context of one historical decade: the 1790s. And it tells the stories of five political radicals, who began the decade as embodiments of the late enlightenment’s spirit of buoyant optimism, but ended it crushed by disappointment and disillusionment; harbingers of a new cultural attitude towards emotion, defined by pessimism, conservativism and individualism. The shift that A Revolution of Feeling charts – from political hope to disappointment – seems incredibly resonant in the present moment.

A Revolution of Feeling won a Gladstone’s Library Political Writing Residency, which Rachel will take up in September 2019.

Praise for A Revolution of Feeling:

a ‘mighty project’, a ‘passionate…book, fuelled by vim and vigour, and one that will change the way we think about feeling.’ (Frances Wilson, New Statesman)

a ‘singular book…invaluabl[e] for our time’ (Ed Vulliamy, Observer)

You can read more reviews here

You can buy the hardback of A Revolution of Feeling here.

You can buy the paperback here.