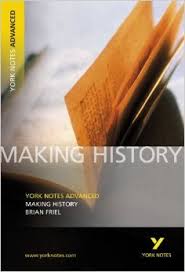 Brian Friel’s 1989 play Making History centres on Hugh O’Neill, Earl of Tyrone, who led an Irish and Spanish alliance against the armies of Elizabeth I in an attempt to drive the English out of Ireland. The action takes place before and after the Battle of Kinsale, at which the alliance was defeated: with O’Neill at home in Dungannon, as a fugitive in the mountains, and finally exiled in Rome. In his handling of this momentous episode Brian Friel has avoided the conventions of ‘historical drama’ to produce a play about history, the continuing process. Rachel Hewitt wrote the York Notes Advanced guide to Friel’s play.